In an effort to keep me more honest about what I’m shoving into my face, I decided that for all of January, I would become a vegetarian. I’ve flirted with the idea before, but could never get over the fact that to be a vegetarian, you can’t eat meat. Like, EVER. And, well, I love me some meat. I just don’t eat it very often. And, when I do eat meat, I make every attempt to ensure it comes from a good home (i.e. cage free/hormone free/antibiotic free/free roaming/grass-fed/etc). I don’t buy chicken or beef from the big companies you would typically associate with those foods, mostly because of how the animals are treated. Generally, when I buy beef, pork or chicken, I purchase it at a farmer’s market, Whole Foods or Outpost – places where I know where the meat came from. I wasn’t always like this, but then I started doing some research and of course, watching films like Food, Inc. solidified this choice for me.

So, here I am. Day #1 of vegetarianism. So far, so good. I almost screwed up, however, at 12:30 this morning while at a New Year’s party. There were bacon-wrapped water chestnuts as an hors d’ouvre and I had been eating them earlier in the night. Luckily, even a slightly intoxicated Amy was able to catch herself before eating it! I’ve been ok so far, but I’m sure that’s because I’m at home and I bought a bunch of vegetarian-friendly foods to aid in the transition to meat-free living.

For brunch, I had some leftovers from last night – crackers, beer bread and pizza dip.

For dinner, I had the veggie pizza you see below. MMMMMM (do you see a pattern here? Obviously, pizza is my weakness). 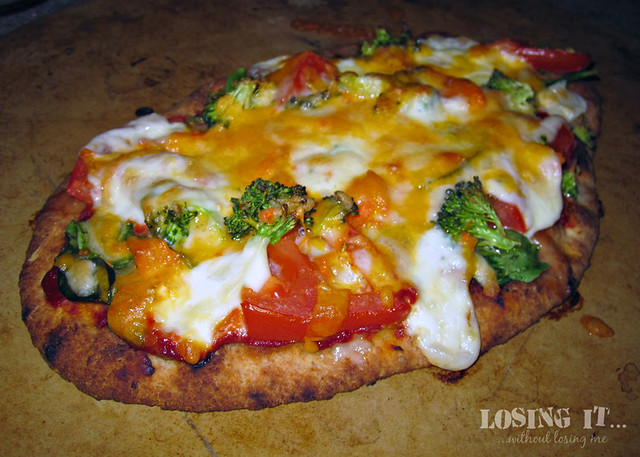 Here’s the recipe for my Veggie Pizza on Naan Bread:

Ingredients:
Preheat the oven to 400F.
Place crust on pizza stone, cookie sheet or pizza pan. Put a couple of spoonfuls of tomato paste on the crust and spread around. Top with veggies. I used spinach, carrots, broccoli and tomatoes. Then I sliced up the fresh mozzarella (about 3 small balls) and placed on the pizza. I topped with a sprinkle of the shredded cheese blend and baked in the oven for 10-15min (until cheese begins to brown).
I’ve done so many variations on this in the past. One of my favorite veggie mixes to use is broccoli slaw. MMMMM.

I wanted to know what I was in for when I weighed in tomorrow morning. So, tonight when I was changing into my pj’s, I stepped on the scale. Imagine my surprise when I saw something there I haven’t seen in at least a year or two (probably more).

Additionally, I have lost a total of 36.5 inches… from my neck, bust, waist, gut, thighs, hips, arms, knees, calves, you name it. (And yes, because I know you’re sick jerks, if I was a boy I would measure that too).

My goal when I started working out with John (my trainer) was to be in the 240’s by the time of my half marathon in wine country. 19 days early, I’ve hit that goal. Wonder what I can do in the next 3 weeks?

Today also brings an end to my Pound for Pound Challenge. If you signed up way back when, this is what you owe:

I will be sending you all an e-mail tomorrow. Remember, you agreed to make the donation on my fundraising website by this Sunday, July 4. Click here to donate now. And heck, even if you didn’t take the challenge, it’s not too late. Get in on the fun and pick one of those wacky donation amounts above!

I’ve had a lot on my mind lately, including a foot sprain, new responsibilities at work, a troublesome digestive system (TMI) and some other things going on. I’ve had so much on my mind I need to purge, so expect a multitude of blogs in the next week or two.

I’ve lost 20.2 lbs since starting this journey January 6, 2010. Sure, the weight hasn’t come off as quickly as I had hoped, but I’ve kept the weight off, which is a huge accomplishment. I’ve never stuck to a nutrition and exercise plan for this long in my entire life. I’m working out 6 days a week.

I am 20% of the way there to achieving my goal of losing 100 pounds. I hope the next 20 doesn’t take as long as the first, but if it does, I’ll be ok with it. My life has changed for the better.

23 weeks ago, who’d have thought I would be just a month away from completing a half marathon?

And yet, here I am, preparing for my 10-miler on Sunday, and a 12-miler the following week.

Life is good. God is good. I’m so grateful.

I got back from visiting my friend Holly in St. Louis late last night. I had a great time catching up with her and all my STL friends, but the weekend was not necessarily kind to my new lifestyle.

I tried to eat as healthy as I could (getting a salad instead of fries, a grande latte instead of a venti, etc), but I still made some poor choices. I was on vaca though, so I get a free pass, right? Right?

So I’m home now and working on my food/exercise plan. I’m hoping to join a gym this week and today I spent a small fortune on veggies and other healthy goodness from Whole Foods.

Here are some of my ideas…

I’ve also joined DailyMile… you can follow me here. I tried SparkPeople but I think it might be too much for me to keep up on.